There is a lot of contreversy about the subject of Electromagnetic Field or EMF radiation. This article will help you understand EMF radiation in it’s different forms and the risks associated with it.

What is EMF Radiation

Electro magnetic radiation (often referred to as EMFs) is an essential part of the physical world. Electric and magnetic fields occur naturally within our bodies in association with nerve and muscle activity. We also experience the natural magnetic field of the Earth and natural electric fields in the atmosphere.

While these natural EMF’s are essential to your well-being and life, in general, EMF’s from man-made sources — electric currents and voltages from the power system — contribute to pollution that you can’t see, but which maybe harmful to us.

EMF radiation or Electromagentic field radiation, are all the above range of frequencies that are categorized in two types. Ionizing (high-frequency) and non-ionizing (low frequence).

As we can see from the chart below that visible light is at the higher end of non-ionizing radiation, with tanning with part of the spectrum just crossing over to ionizing (Trusted Source) 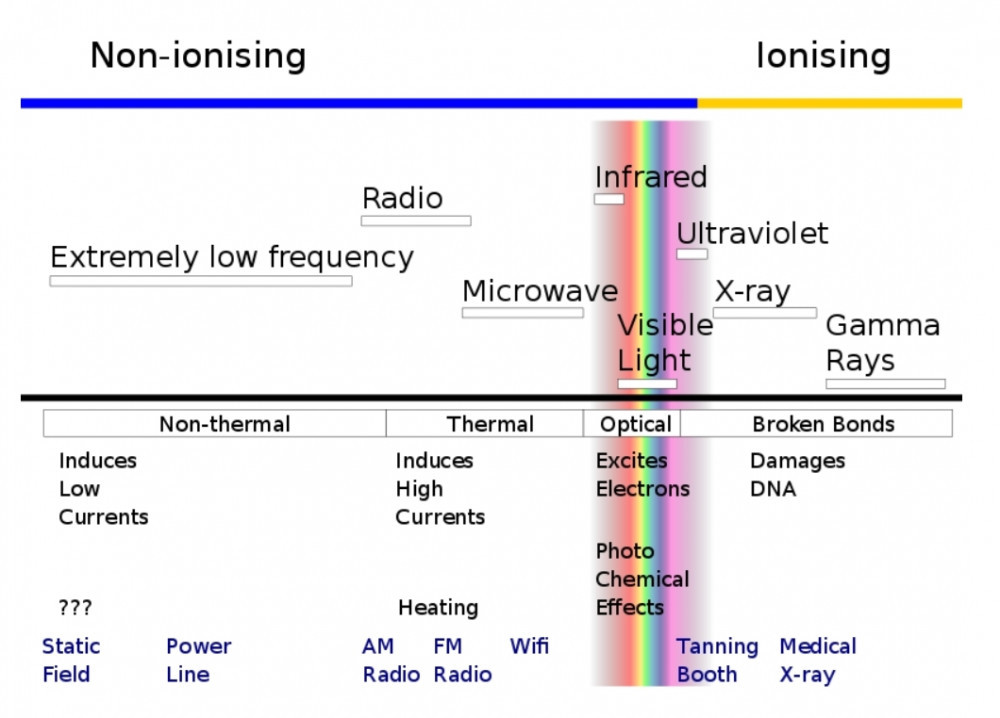 Ionizing radiation is radiation with enough energy so that during an interaction with an atom, it can remove tightly bound electrons from the orbit of an atom, causing the atom to become charged or ionized.

In contrast, non-ionizing (or non-ionising) radiation refers to any type of electromagnetic radiation that does not carry enough energy per quantum (photon energy) to ionize atoms or molecules—that is, to completely remove an electron from an atom or molecule (Trusted Source) .

As can be seen from the chart above, non- ionizing RF radiation is far lower in energy than gamma, cosmic and X rays and such, which can fry your DNA. In between is visible light, which still has the capability of causing cancer. It’s also much higher in power when you lay in the sun. Your wifi router meanwhile is tiny in comparison, and below the ionizing energy threshold.

Though no where at the level of high frequency ionizing radiation such as X-rays and cosmic radiation, EMFs, like cell phone radiation, impact our bodies at a cellular level.

Science has shown a number of negative effects including cell membrane damage, loss of calcium ions and DNA damage. All of this damage on a cellular level has repercussions on your health.

How Can We Protect Ourselves from EMF Radiation ?

There are different ways that we can protect ourselves from EMF radiation inside our homes, including and not limited to some indoor house-hold plants that absorb EMF radiation.

There are also many ways to reduce your exposure to EMF radiation such as keeping your distance from emitting sources as much as you can.

As the inverse squared law applies to EMF radiation, increasing the distance from an emmiting source by only a little, will decrease the exposure by a greater factor, in fact it will square route the exposure.

With long term exposure to non-ionizing EMF radiation, such as cell phone, wifi and communication towers, the health risks are increased and it is highly recommended that we do our best to limit this exposure.

This can be done with improved habits of keeping our distance from emmitting sources (including cell phones) and switching our wifi when we go to sleep at night.

We can then as an additional measure, seek to protect ourselves from EMF radiation using plants, crystals and anti EMF cell phone and device protection.